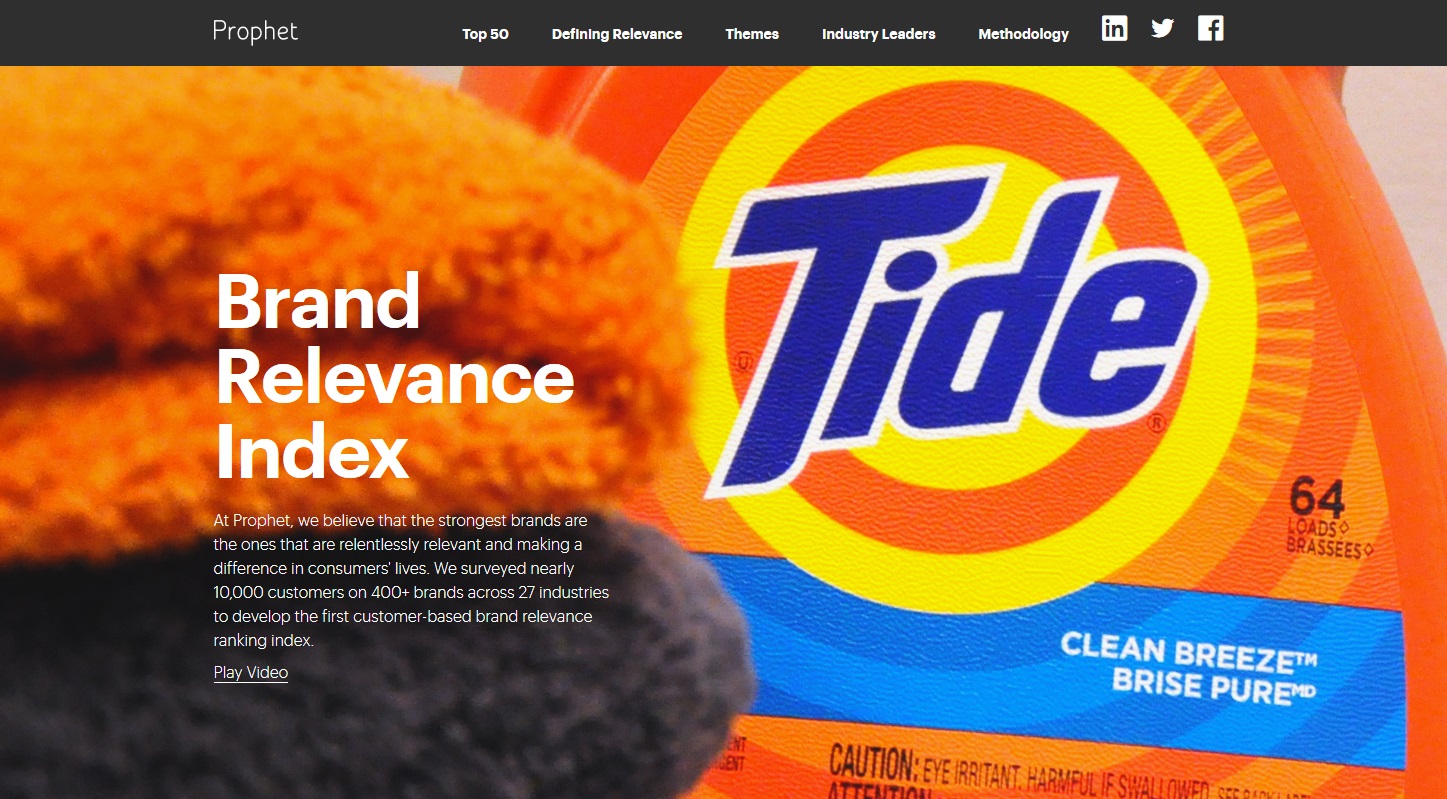 I’ve always been surprised when I see Google or Facebook appear on any “top brands” lists. It’s branding 101 that a strong brand must have loyalty, awareness, positive associations, perceived quality, as well as proprietary assets, based on the model from David Aaker, and implicit in this, I always thought, was trust. You can neither be loyal to something you don’t trust, nor can you have positive brand associations toward it, nor perceive an untrustworthy thing to possess quality. According to a survey from a consultancy, Prophet, which looked at over 400 brands across 27 industries, polling nearly 10,000 customers, we don’t trust either Google or Facebook. Neither makes it into the top 50; those that make it into the top 10 are Apple, Samsung, Microsoft, Netflix, Nike, Chick-fil-A, Amazon, Spotify, Lego, and Sephora. Google slots in at 55th, and Facebook at 98th.
To me, the Prophet approach makes far more sense, as for years—long before Edward Snowden revealed the extent of us surveillance under PRISM—I had been blogging about privacy gaffes and other serious issues behind both companies.
People may find Google and Facebook to have utility and enjoyment, yet we willingly volunteer plenty of private information to these sites. We do not trust what they do with this information. Adweek notes that in a separate survey, Facebook was the least trusted brand when it came to personal information, making it worse than the US federal government. There have been so many occasions where users have found certain privacy settings on Facebook altered without their own intervention; and I’ve constantly maintained that, with the bots and spammers I encounter daily on the social network, its claims of user numbers are difficult to accept. In fact, if you have Facebook’s advertising preferences set to reject tracking, the site will not stop doing so, compiling a massive and sometimes inaccurate picture of who you are. What it does with that, given that you have told the site that it should not use that information, is anyone’s guess. It makes you wonder why that data collection continues. At least Google (now) stops tracking advertising pref­erences when you ask it to.
These surveys indicate that consumers are wising up, and it opens both Google and Face­book up to challenge.
Google dethroned the biggest website and search engine in the world when it was released, so no one’s position is guaranteed. Duck Duck Go, a search engine far better at privacy, has chipped away at Google’s share; and I find so much Facebook fatigue out there that it could follow Myspace into irrelevance. When I hear those speak of these two companies’ positions as being unassailable, I take it with a grain of salt.
We already have seen peak Facebook (and Twitter, for that matter), for when it came to Super Bowl stats this year, there was a massive 25 per cent drop in activity. Interestingly, despite the trending #RIPTwitter hashtag last week, I don’t agree with those who think Twitter is heading into oblivion, for the simple fact that the site is less invasive and seemingly more honest than Google and Facebook. Those same experts, after all, said that Google Plus would be the Facebook-killer, while I consistently disagreed from day one.
The Medinge Group predicted correctly in the early 2000s when it was stated that consumers would desire greater integrity and transparency from all their brands, something reflected in our book, Beyond Branding. I don’t believe that we are so different when it comes to dealing with online brands.
This is, then, a welcome challenge for all businesses, to ensure that they demonstrate transparency to their audiences. You don’t want to lose your trust, because in bad times, it’s the one thing you can hang on to. It’s not something Google or Facebook seem to be aware of as they tend to ignore users’ demands and queries.
In the last 24 hours, author Holly Jahangiri found an illustration depicting child pornography on Facebook that had been reported by many of her friends—only for Facebook to deem it constantly acceptable, despite what it states in its own terms and conditions. It was only when she Tweeted about it that Facebook finally responded publicly; and only when she involved a US government agency did the page disappear. The pressure of accountability like that against dishonest companies tells me Twitter will be around for a while yet.

The trend this year, I believe, is the ongoing rise of challengers to these two brands. When the tipping-point against them occurs, I do not yet know. But now, I sense that it’s closer than ever.

Jack YanGoogle and Facebook should not head “top brands” lists when consumers do not trust them02.10.2016